Create and use roles for your team

In this article, learn how to:

Define roles for your company and assign team members to them.

Before you can start using the roles feature, you must define roles for your company!

Go to "People" > "Roles", then create your company's roles.  Think of roles like jobs that could be filled in your organization.  It's best to name each role using the singular tense.  For example, "Writer", "Editor", "Manager", etc.

Note:  Roles are different from permissions.  Every team member has a permission level which defines what they're able to see and do in ProcessKit.  More on permissions here.  Roles are used for the purpose of task assignments.

Set role assignments on steps in a process template

When you're building your process template, you can set the "Assignment" on each step in the process.  When it comes to assigning team members to steps in at the process level, you have two ways to do this: 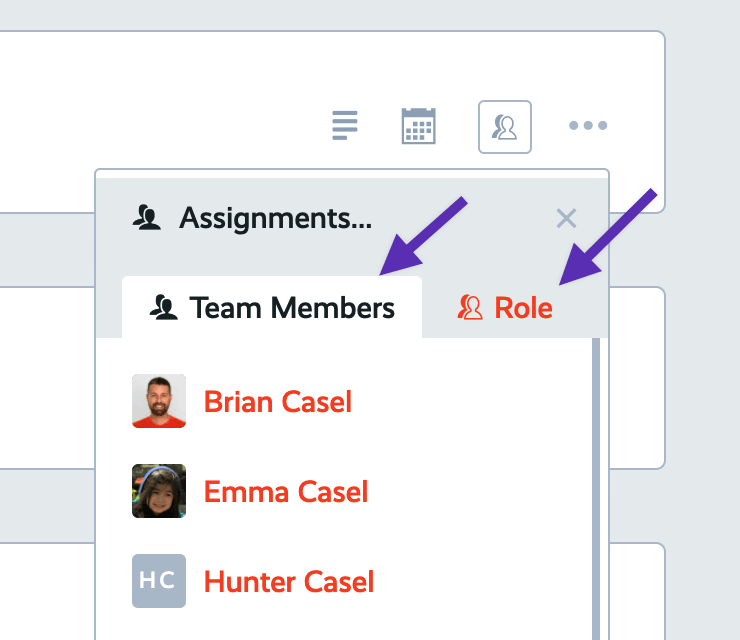 When you assign a step to a "Role", you have a few settings to configure:

As of this writing, there are 4 different "Assign by" rules to choose from:

Once steps in your processes are assigned to a role, each with their own "Assign by" rule, then by assigning team members to roles at the client level, or the board and project levels, will determine who gets assigned to each task...

When you view any client in your Clients list, you'll find a "Roles" tab.  This page lists all of the roles in your organization.  For each, you can select which individual team member(s) should be assigned to those roles for this client.

For example, let's say you have a "Writer" and an "Editor" role.  You have 3 writers and 3 editors on your team.  For your client, "Dunder Mifflin", you can specify that Jon is the writer, and Jane is the editor, for all projects for Dunder Mifflin.

Once a project is associated with this client, then any tasks that are to be assigned "By client" will be assigned to those people you've selected on roles on this client.

The client association can happen either when a new project is created (when creating the project, click "More settings" to select which client this project is for).  Then once created, the tasks will be assigned accordingly.  Or, you can add a client to a project after creating the project.  In this case, once you've added the client association, those tasks will be assigned to people at that point.

Note:  Removing a client association from a project will not unassign anyone from tasks.  But adding a client to a project may add new task assignments within this project.

Select role assignees at the project and board level

Note:  Removing someone from a role on a project will not unassign them from any tasks.  But adding someone to a project's roles may assign them to tasks within this project.

Note:  Removing people from roles at the board level does not remove them from roles on existing projects.

Lastly, you have the option to select "random" or "all people" as the "Assign by" rule for tasks.

New to ProcessKit? Sign up for a free trial here
Did this answer your question? Thanks for the feedback There was a problem submitting your feedback. Please try again later.